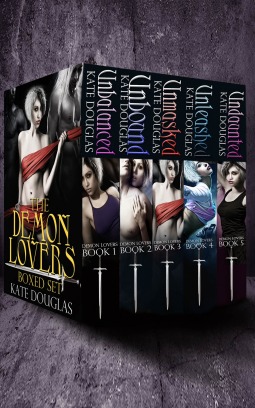 * Also includes bonus material from Dark Wolf, the first book in the Spirit Wild series, and Dream Unchained, the second book in the Dream Catchers series.

About the Author:  Some people just seem to know they are meant to write, but it can still take a while to figure out exactly what their career will entail. Kate Douglas started out writing radio copy for a country western radio station in 1972, wrote and illustrated an educational cartoon strip for the American Mosquito Control Association for a number of years, was a newspaper reporter for a small town weekly where she covered everything from high school sports to drug busts, and then, in the mid-1980s, decided to write her first romance.

Many submissions and rejections followed.

In 1998, she published with a small ebook publisher before anyone knew what an ebook was, but it wasn't until 2005, a full twenty years after finishing that first romance, that she signed with a New York publisher.

Her next series, Spirit Wild, debuts April 30, 2013 with Dark Wolf. This is a spin-off series that takes place in the Chanku world readers first met in Wolf Tales. Characters are the grown children of the first Chanku.

Kate and her husband of over forty years have two adult children and six grandchildren. They live in the small town of Healdsburg, California, in the heart of the beautiful Sonoma County wine country.

**Gifted to me through Netgalley by publisher for an honest review

This story is also about 50 pages.  Again short stories are not my favorite because it is hard to connect with characters.  Addie has accepted her role as the fulcrum.  While they were out hunting demons, Jett was attacked and things get out of hand.  Locan and Addie will not give up on Jett and will do anything to save him because they both love him.  This story covers those 2 days of time and not much action outside of sex.  Again some very adult and descriptive scenes in this book.  Anyone who loves Kate Douglas will like this story, but anyone who does not like erotic ménage may want to skip this series.

Okay another adventure with Addie, Locan, and Jett, and I really liked it now that I feel connected with the characters.  Locan is forced to deal with some things he didn’t know about himself and struggles with it, but Addie & Locan are supportive & loving.  I didn’t much like the Goddesses, but they were kind of self absorbed and only cared about themselves and what they wanted.  Az was cool but has a lot of mystery that I hope we learn more about him in the last book.  This book of course has some very adult material that is erotic ménage & as well as some bondage.  Kate Douglas’ writing is very descriptive and gets your imagination going.  If you are one of her fans, I think you’d love the story.  You know if this is your type of story, and if it is you will enjoy it :)

Again, this is an adult series, and probably not for you if you do not like erotic ménage.  The way Kate Douglas describes things is amazing because your imagination will have no problem processing her work.  I really love Addie’s personality, and she is such a strong character and fights for those she loves.  In this adventure, we learn more about Az, and I easily loved his character because of Addie and her men.  Ukopach is in this story too, and he is funny for a PG demon.  Of course, they are more demons to battle and the threat of hell.  I really liked this book, and I was happy with where it ended. If you enjoyed the other books in this set, you must read this one which I think is my favorite of the five.  If you haven’t read this set of stories and especially if you are a Kate Douglas fan, you should read this because you will enjoy it.