Cover Reveal for The Storm and the Darkness by Sarah M. Cradit 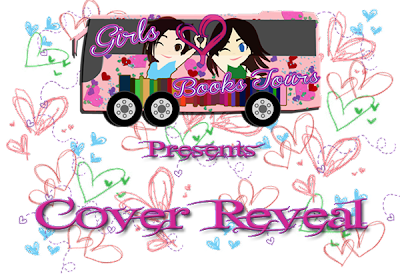 First let's take a stroll down memory lane of the first book in this series: 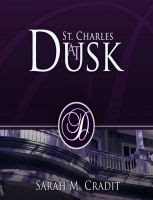 St. Charles at Dusk
The House of Crimson and Clover #1
by Sarah M. Cradit

Blurb:  At twenty-one years old, Oz Sullivan is unable to understand his fascination with and attraction to a much younger Adrienne Deschanel. Adrienne is spirited, passionate, and impulsive... all of the things Oz is not. Oz is drawn to her in a way that is inexplicable to him, and deeply concerning to those who know him.

Amidst her father’s threats, Adrienne makes secret plans to run away with Oz. Before they can act on them, Adrienne and her family are involved in a tragic accident that takes the lives of the entire family. Adrienne’s body, however, is not found in the wreckage. Oz is devastated and unable to move on when an extensive investigation fails to solve the mystery of Adrienne’s vanishing.

Three years later Oz has made a life for himself as an attorney at his family’s law firm. However, the predictability and peace of his quiet life is shattered when Adrienne is discovered, alive and well…but with no memory of anything before the accident. Oz is conflicted: grateful that she is alive but still damaged from her disappearance and hesitant to get involved and re-open a wound that never fully closed. Yet, Oz finds himself unable to resist helping when Adrienne’s desperate attempt to flee the confusing and dark influences in her life instinctively finds her on Oz’s doorstep. Unable to turn her away, but equally unable to get too involved, Oz keeps from her the truth of who he was and what they meant to each other before she disappeared. Against his better judgment he finds himself enmeshed in the mystery of what happened to her when she was sixteen. The more he learns, the less he understands, and as the story unfolds and Adrienne’s memory slowly returns, everything they thought they both knew gets called into question.

And now for the cover reveal.... 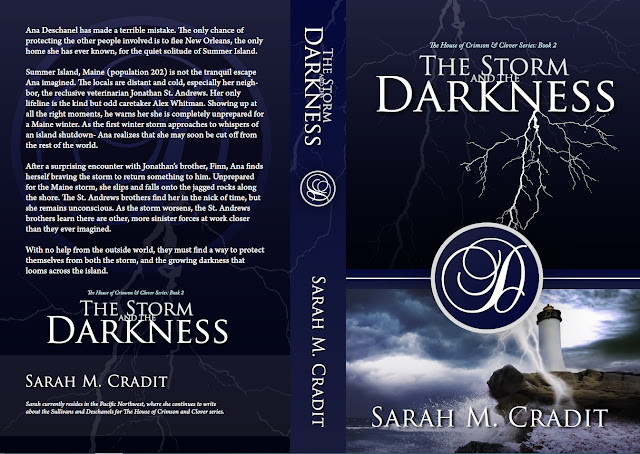 The Storm and the Darkness
The House of Crimson and Clover #2
by Sarah M. Cradit

Blurb:  Ana Deschanel has made a terrible mistake. The only chance of protecting the other people involved is to flee New Orleans, the only home she has ever known, for the quiet solitude of Summer Island.
Summer Island, Maine (population 202) is not the tranquil escape Ana imagined. The locals are distant and cold, especially her neighbor, the reclusive veterinarian Jonathan St. Andrews. Her only lifeline is the kind but odd caretaker Alex Whitman. Showing up at all the right moments, he warns her she is completely unprepared for a Maine winter. As the first winter storm approaches to whispers of an island shutdown- Ana realizes that she may soon be cut off from the rest of the world.
After a surprising encounter with Jonathan’s brother, Finn, Ana finds herself braving the storm to return something to him. Unprepared for the Maine storm, she slips and falls onto the jagged rocks along the shore. The St. Andrews brothers find her in the nick of time, but she remains unconscious. As the storm worsens, the St. Andrews brothers learn there are other, more sinister forces at work closer than they ever imagined.
With no help from the outside world, they must find a way to protect themselves from both the storm, and the growing darkness that looms across the island.

About the Author:  Sarah is the author of the Southern Fiction series, The House of Crimson and Clover. The series was born of her combined loves of New Orleans, family dramas, and the mysterious nature of love and desire. Her books combine elements of mystery, suspense, intrigue, romance, and even paranormal. She is always working on the next book in the series, and absolutely loves connecting with her fans. 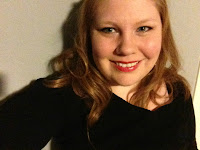 Sarah lives in the Pacific Northwest, but has traveled the world from Asia to Europe to Africa. When she isn't working (either at her day career, or hard at work at writing), she is reading a book and discovering new authors. The great loves of her life (in order) are: her husband James, her writing, and traveling the world. 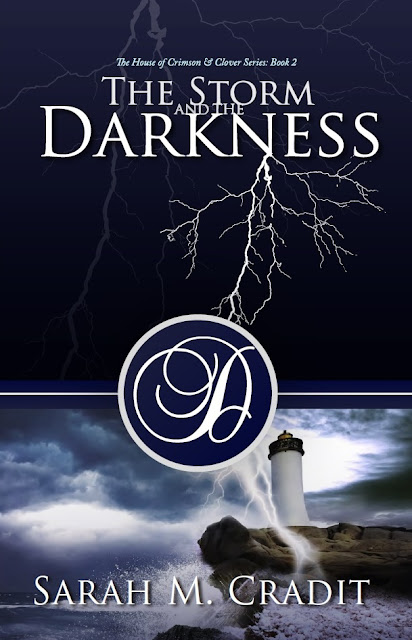 My Thoughts on the cover....
I think it looks cool having the lighthouse on the cliff throw in the lightening for shock value, and this storm should get some attention.