The Daemon Whisperer by Candice Bundy

The Daemon Whisperer by Candice Bundy 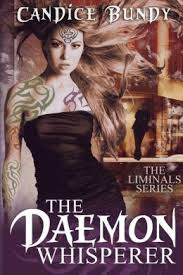 Meriwether Storm discovered the grisly remains of her parents when she was only fourteen—the result of a failed daemon summoning. Meri immediately swore vengeance on the daemon who'd killed her parents, but there was only one problem: she had no idea which one had committed the atrocity. Before their untimely deaths, her parents trained her intensively in the arts, which Meri used to follow in their footsteps, ever seeking the daemon's name. Now, despite her years of searching, she's no closer to the truth and her time is running out.

When a mysterious daemon named Azimuth offers Meri a deadly summoning in exchange for information about her parents’ murderer, she takes it immediately and without intimidation. What does worry her is her attraction to Azimuth: when he touches Meri, her pulse races and she breathlessly awaits the feel of his lips upon her skin. Meri knows she should keep him at arm's length, but her traitorous thoughts obsess over him night and day.

Blinded by her desperation for the truth and her desire for Azimuth, Meri places her trust in the creatures who are her sworn enemy, jeopardizing her need for vengeance. After Meri discovers there's more to the deal than the daemon cabal first promised, can she accept all they have to offer?

When retribution is the only thing that drives you, how much are you willing to sacrifice before you lose yourself to the cause?

* * * *
The Liminals series is set in a future dystopian Front-Range Colorado filled with daemons, god-touched, and other not quite human creatures. Liminal beings stand at the crossroads between our world and alternate dimensions and have the ability to set things back to rights, if they so choose.

You can read first chapter at: http://candicebundy.com/the-liminals

I really liked this book. Meri’s back story makes her for a great leading lady. I loved watching her roll with the punches she is dealt throughout the book. This book is packed with action. I never once felt like it was a struggle to stay interested which sometimes happens with the first book in a series. I felt like I was there with Meri while she struggled with all the changes in her life, her battles to survive, and these weird feelings she is having for Az. I do not like giving away the book because I think it should be your own journey to discovery, but I can’t wait to see where this series goes whether it is following Meri and Az or if we will learn more about their cabal. There is a lot of dark topics is this book that may not be for everyone with the killing, sacrifices given to daemons, and even some cannibalism (daemon not human). I am definitely going to continue reading this series and recommend to anyone who is not opposed to the dark matters this book contains. I already can’t wait for the next one :)
Posted by Cassandra at 5:28 PM