Guest Post, Review, & Giveaway for Walk Away with Me by Darby Davenport

Learning to Believe in Happily-Ever-Afters

I've never been a girly girl. As a child, I preferred bugs to dolls and books to dresses. Yeah, I'm not that much different as an adult, either. As my life experience invariably grew year after year, I found myself becoming embittered, cynical, and suffering a bad case of the mully grubs. A string of failed relationships followed by a failed marriage is enough to turn even the warmest heart to ice, and I was no exception.
In the summer of 2012, I found myself moving to a new house in a new town to start my new single life. I was fully prepared to live out the rest of my days as a spinster recluse and had no doubt that one day neighborhood children would think I'm some kind of evil witch and thus be too afraid to even walk past my house.
Oh, well. At least I had my pets, my writing, and an active social life... on Facebook. That would be enough, right?
Wrong.
Sometimes rock bottom is a good place to be. As those annoyingly optimistic people like to say, "You can only go up from here." For once, they were actually right about something.
So I met a guy. A pretty great guy, actually. And I did everything in my power to friend-zone him. How rarely things go according to plan.
We grew closer and closer through a string of Facebook conversations, then started spending some time together in the real world. It didn't take me long to see that he was a genuinely kind man who liked me for who I am—warts and all.
My mind was blown.
After a month of chatting online, we spent a 4-day weekend together in constant company. At the conclusion of which, we shared our first kiss. Well, that was the end of my resistance to love. He practically moved in then and there, and we officially started living together within a month. Two months later, we snuck off and eloped in a beautiful ceremony in the park that was made even more special because it was just for us.
As of today, we've been together for nearly 7 months—more of it married than not. And you know what? I'm deliriously happy. Neither of us thinks we're worthy of the love the other gives, which makes us absolutely perfect for each other. While we do in fact live real life together—chores, financial decisions, and serious talks about the future—we also still whisper sweet nothings, slow dance in the living room, hold hands, and find special ways to express the love that's just bursting from both of our hearts.
What changed? How did I go from a future of certain spinsterhood to a love zealot?
I just happened to meet the right person. It seems so simple, yet so immensely difficult. If such a thing as soul mates exists, then we have—what?—a 1 in 3.5 billion chance of meeting our perfect other? I never believed it could happen for me... until it did and at the absolutely perfect time, might I add.
I learned to believe in happily-ever-after when I met and married the embodiment of mine. I love you, Falcon! 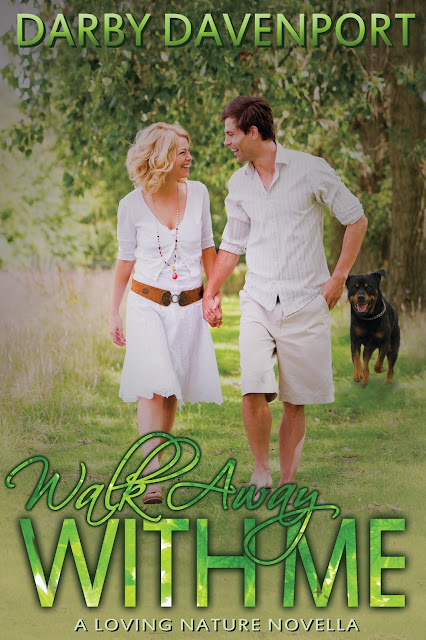 About Walk Away with Me

A man with a painful past, a woman who fears commitment, and a dog with only one more chance at life--together, can they find love?
***
What is Charlie Rockwell supposed to do when the sad Rottweiler's eyes connect with hers through the TV screen and work their way straight into her heart? She adopts him without a second thought or the slightest knowledge how to take care of the large, needy dog with the traumatic past.
Ethan Porter is not happy when a savage Rottweiler picks a fight with his mild-mannered Golden Retriever at the dog park. But his anger quickly dissipates when tears begin to form behind the eyes of the dog's beautiful owner--eyes that are far too familiar for his liking. Disregarding his instincts, Ethan can't deny her plea when she asks him to teach her the basics of dog ownership.
Can he ignore the fact that she bears a strong resemblance to his ex and finally learn to trust again? Will she find committing to both man and dog more exciting than the freedom of a single, unrestrained life?


Walk Away with Me is just $2.99 for the eBook and $9.95 for the paperback. Here are all the links you’ll need: Amazon US, Amazon UK, Barnes & Noble, Smashwords, Kobo Books, GoodReads.

***
"Lovable characters, compelling plot, and an exciting twist that will leave you on the edge of your seat as Charlie and Ethan find their happily-ever-after." ~ Lucy Kevin, New York Times bestselling author of THE WEDDING KISS

Darby Davenport never believed in love--that is, until it happened to her. Now she's a firm believer that every story is a love story, and has taken to writing out her favorite romantic fantasies and sharing them with the world.

Darby, who also writes young adult and children's fiction under the pen name EmlynChand, lives in suburban Detroit with her own personal soul mate--fellow writer, Falcon Storm--and private zoo, which includes a music-loving Sun Conure, hyper-active Golden Retriever, and two scrappy little rescue mutts.
You can connect with her at:  http://www.darbydavenport.com

Okay I’m going to start this review by explaining that I usually like paranormal with my romance, so this book was a wonderful surprise.  The first thing that drew me in was the animal compassion, and Charlie adopting Rugby to save him because he was unwanted.  She took him to a dog park trying to learn how to handle him, but Rugby was the one handling her.  It brought back memories of childhood and being dragged around by my dogs.  Both Charlie and Ethan were trying to run from this connection they had.  I remember blowing a great relationship because of fear, so I really connected with Charlie and her wanting to run far away.  This story had all the pieces; it made me laugh, cry, and in the end jealous.  One day maybe I’ll be lucky enough to find the ‘one’, but for now I’ll have to rely on awesome books like this one.  This is my first book by this author, but I loved it and will look for more :)  Awesome job, Emlyn…I mean Darby ;)

What it includes:  The special launch week swag basket includes items inspired by the book:  Must Love Dogs DVD, a plush Rottweiler toy, Classic Love Songs CD, and two books–The RoMANtics Guide:  Hundreds of Creative Tips for a Lifetime of Love and Easy Thai Cooking:  75 Family-style Dishes You Can Prepare in Minutes.

a Rafflecopter giveaway
Posted by Cassandra at 2:33 PM