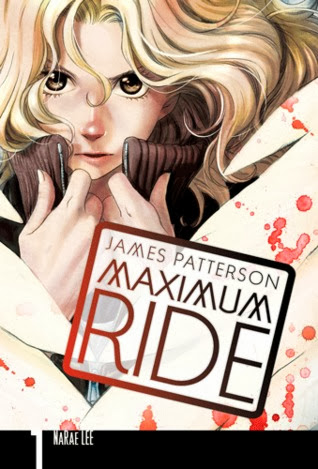 Goodreads blurb:  Fourteen-year-old Maximum Ride, better known as Max, knows what it’s like to soar above the world. She and all the members of the “flock”—Fang, Iggy, Nudge, Gasman and Angel—are just like ordinary kids—only they have wings and can fly. It may seem like a dream come true to some, but their lives can morph into a living nightmare at any time... like when Angel, the youngest member of the flock, is kidnapped and taken back to the “School” where she and the others were experimented on by a crew of wack jobs.

Her friends brave a journey to blazing hot Death Valley, CA, to save Angel, but soon enough, they find themselves in yet another nightmare—this one involving fighting off the half-human, half-wolf “Erasers” in New York City. Whether in the treetops of Central Park or in the bowels of the Manhattan subway system, Max and her adopted family take the ride of their lives. Along the way Max discovers from her old friend and father-figure Jeb—now her betrayed and greatest enemy—that her purpose is save the world—but can she?

About the Author:  The subject of a Time magazine feature called, "The Man Who Can't Miss," James Patterson is the bestselling author of the past year, bar none, with more than 16 million books sold in North America alone. In 2007, one of every fifteen hardcover fiction books sold was a Patterson title. In the past three years, James has sold more books than any other author (according to Bookscan), and in total, James's books have sold an estimated 220 million copies worldwide. He is the first author to have #1 new titles simultaneously on The New York Times adult and children's lists and is the only author to have five new hardcover novels debut at #1 on the list in one year—a record-breaking feat he's accomplished every year since 2005. To date, James Patterson has had nineteen consecutive #1 New York Timesbestselling novels, and holds the New York Times record for most Hardcover Fiction bestselling titles by a single author (63 total), which is also a Guinness World Record.

From his James Patterson Pageturner Awards (which rewarded groups and individuals for creative and effective ways to spread the joy of reading) to his website ReadKiddoRead.com (which helps adults find books that kids are sure to love) to his regular donations of thousands of books to troops overseas, Patterson is a lifelong champion of books and reading. His first foray into books for all ages was the critically acclaimed Maximum Ride series, which debuted on the New York Times bestsellers list at #1 and remained there for twelve straight weeks. The series has so far made appearances on The New York Times bestsellers lists ninety-four cumulative times, proving that kids of all ages love page turners. He captured the attention of boy readers with the Daniel X series, and his third series for readers of all ages debuted in December 2009 with Witch & Wizard, which spent five consecutive weeks atop the New York Times bestsellers list.

One of Forbes magazine's Celebrity 100, James made a guest appearance on the popular FOX TV show "The Simpsons" in March, 2007.

**Checked out from the high school library

Okay this is my first time reading a graphic novel.  My son reads them all the time.  We have a book club at the high school I work at, and this month’s theme is to read something you usually wouldn’t read; I picked to try a graphic novel/manga (I don't know what the difference is).  My boys (my son and all the boys I teach) are always reading graphic novels because you know boys must have pictures…lol

Okay differences I notice between a graphic novel and a book are that you only get bits of the characters compared to a book.  It is totally like snap shots of a book in other words it is sort of like a movie that doesn’t move.  It is nice to know what the author envisions for character looks :) While I love seeing the visuals while I’m reading, I also love to use my imagination, so I am torn.  Oh another bonus, it doesn’t take long to read a graphic novel compared to a book which is cool :)

Okay the story is very intriguing, and I really like Max and her family especially because I think it would rock to be able to fly :)  Max is fierce which makes her an awesome heroine; she fights for what she believes in.  The bad part is I can’t figure out what to say about the story where it won’t give something away and ruin it for you.  I will say this though :) I’m going to continue reading this series in graphic novels, and then I’m going to go read the book version because I think it is going to be awesome too.  Also my son does love this series and plans to read it tomorrow now that I have finished it.

I recommend graphic novels for all your reluctant readers and your kids who are very visual.  I also think they are a great break in between books or filler when you don’t have time to read a full novel.