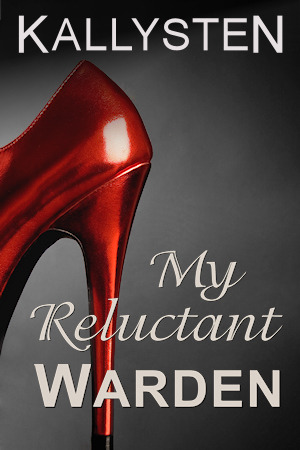 My Reluctant Warden by Kallysten

Goodreads blurb:  When her boss brought her to the party of the season, Mr. Ward’s birthday bash, Angelina thought she had slipped on Cinderella’s shoes.

Now that she is compelled to remain in the mansion, trapped with a host who was only pleasant to her in a shared fantasy, the dream abruptly turns sour.

Under other circumstances, she might enjoy staying in an opulent guest suite, with a butler waiting on her every desire. But her cage, as gilded as it may be, remains a prison, and her host, even if he wishes she were gone, is still her warden.

As she struggles to get used to the situation, she can’t figure out what to think of Morgan Ward, a man who claims to be a vampire, who at times ignores her and at times shows himself unexpectedly thoughtful. A man she’s attracted to despite her better judgment.

However, an unexpected conversation with her boss may give her no choice but to get much closer to Morgan than she’s ready for…  (29,000 words)

About the Author:  Kallysten is a writer of romance novels and short stories, most of them with paranormal elements.

Her first eBooks were published by Linden Bay Romance in 2005. The defunct Venus Press subsequently published a few of her short stories. Because so many of her stories are linked as series and part of the same universe, she decided it would make sense to have them all in the same place, which is why she self-published, first with the co-op Alinar Publishing and now on her own. When she sees calls for submissions that speak to her muse, she sometimes tries for them, and was published this way by Samhain and Torquere.

Ok I really liked this short story.  It is the 2nd in this series and about 67 pages, but I wished it was longer and that I was able to figure out more about Morgan.  Right now I’m not sure if Angelina is just dreaming or if Morgan is bipolar.  I can’t stand that I have to wait to see what happens next, but I will :) I just may whine about it! :)  Kallysten writing style is easy to read, and I like characters Angelina, Morgan, and Stephen.  If you like paranormal romance with an unknown element, you will really like this story.  It is keeping me guessing, not sure where it will go next.

**gifted to me by the author for an honest review :)

Buy it now on Amazon or AmazonUK

Posted by Cassandra at 7:16 PM