Review - Red And The Wolf by Laura Lee Nutt @LauraLeeNutt 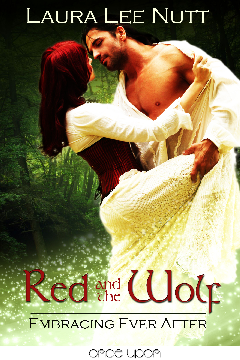 Red And The Wolf
by Laura Lee Nutt

Six years after the attack at her grandmother's cottage, Blanchette still wilts at the sound of a wolf's howl. The scent of pine rising from the Black Forest surrounding her home is a constant reminder of the beast's assault and the injury it left on her finger. After years spent hiding away, Blanchette's world tilts when she wakes--naked and without memory of the previous night--in the forest, instead of behind the safety of her closed shutters.

Since rescuing Blanchette and her grandmother, huntsman Heinrich has befriended her family by day, and keeps watch as a powerful wolf over his territory by night. Sinister otherworldly creatures constantly threaten his domain and the human village he protects.

When the emperor sends a hunter to investigate the attack and slay any inhuman beings, Heinrich must tread carefully and protect not only himself, but his newly-discovered mate, who prowls the moonlit nights alongside him. He must also determine who is responsible for a string of murdered villagers, proving he can control his lupine nature and offer protection to the village, rather than danger.

About the Author:  When the world said that life was little but disappointment, struggle, and pain, Laura chose to still dream upon stars.  She believes birthday wishes can come true, that good can triumph over evil, honor and true love really exist, and hope and happiness are worth fighting for.  When not living vicariously through her fiction, she seeks to encourage others to aspire to such life-affirming ideals.

Laura has been writing since she could pen sentences and making up stories long before that.  She first published a poem, Glass Eyed Inspiration, about her admiration of Patrick Hough, a man blinded by a bullet to the head but who still fought for success and a positive attitude, a martial artist who inspired those around him.  Later, once she decided to embrace her dream of becoming an author, she published Entomophobia: An Insect Incident in A Long Story Short and War Drums Beat in Sacred Twilight.

In fiction, Laura continues to build worlds, instigate adventures and romances, spark the fires of vengeance and love, and thread in that ever illusive yet essential hope. Her favorite theme to explore in writing is that, even in the darkest hour, the best of what we are can shine through and amidst calamity something good can take root and blossom.

Currently, she lives in Texas with her equally fiction obsessed husband, her rambunctious boys, and her dog, Shakespeare. Her favorite book is Peter S. Beagle’s The Last Unicorn, which has one of the most heart-wrenching romances she has ever read.

**Received the ebook free through Story Cartel for an honest review.

Okay this cover is beautiful and sexy.  This is an adult paranormal romance version of the fairy tale Little Red Riding Hood.

I liked this story, and I think I will definitely keep reading this series.  Here is how Laura Lee Nutt describes this series: “This is an adult fantasy romance series published with Lyrical Press, Inc. These books tell what happened after the Happily Ever After of fairy tales.” (found on her Website)  I really like all of the fairy tale twists that seem to be the trend currently.

Heinrich seems like a sexy upstanding man who takes it on himself to protect the village from the things that go bump in the night.  Blanchette is a caring yet traumatized young woman who is trying to be courageous for her family even though fear is always first on her mind since the attack.  I loved watching Blanchette grow as a character and work to take back her life from her fear.  Blanchette’s family is important to the story as well, but I will let you read about them when you read the story.

Karl has been sent by the emperor to investigate the unnatural rumors.  He struggles with his instincts and is very observant even though he doesn’t trust himself.  He learns several lessons through the story, and I would love to see him in future stories as the character that ties the series together.  I have no idea though if that is the route the author will take.  I look forward to continuing this series as it comes out.

I recommend this story to those readers who enjoy the new fairy tale twists as well as paranormal romance readers because this story does have werewolf shifters.