Hello and welcome to this week’s
Two for Thursday Book Blitz #T4T
presented by Month9books/Tantrum Books!

Today, we will be showcasing two titles that may tickle your fancy,
and we’ll share what readers have to say about these titles!

This week, #T4T presents to you:
The Artisans by Julie Reece
and
Nobody's Goddess by Amy McNulty

Be sure to enter the giveaway found at the end of the post! 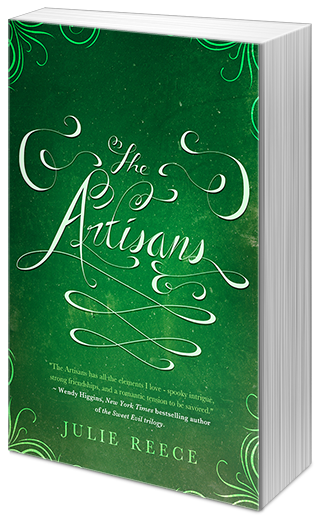 They say death can be beautiful. But after the death of her mother, seventeen-year-old RAVEN WEATHERSBY gives up her dream of becoming a fashion designer, barely surviving life in the South Carolina lowlands.
To make ends meet, Raven works after school as a seamstress creating stunning works of fashion that often rival the great names of the day.
Instead of making things easier on the high school senior, her stepdad’s drinking leads to a run in with the highly reclusive heir to the Maddox family fortune, Gideon Maddox.
But Raven’s stepdad’s drying out and in no condition to attend the meeting with Maddox. So Raven volunteers to take his place and offers to repay the debt in order to keep the only father she’s ever known out of jail, or worse.
Gideon Maddox agrees, outlining an outrageous demand: Raven must live in his home for a year while she designs for Maddox Industries’ clothing line, signing over her creative rights.
Her handsome young captor is arrogant and infuriating to the nth degree, and Raven can’t imagine working for him, let alone sharing the same space for more than five minutes.
But nothing is ever as it seems. Is Gideon Maddox the monster the world believes him to be? And can he stand to let the young seamstress see him as he really is?
The Artisans is a delectably rich, layered and dark YA Southern Gothic inspired by Jeanne Marie Leprince de Beaumont’s classic Beauty and the Beast.


“The Artisans has all the elements I love – spooky intrigue, strong friendships, and a romantic tension to be savored.” ~ Wendy Higgins, New York Times bestselling author of the Sweet Evil trilogy.

WHAT READER’S ARE SAYING:
“It's truly an eerie and unforgettable book with a slightly sexy twist and I loved it.” – Jenna, Shortie Says


“Basically this is pretty much the best book ever” – Jackie, No Bent Spines


“An electrifying retelling of Beauty and Beast with a hauntingly good twist.” – Katie, Mundie Moms

Born in Ohio, I lived next to my grandfather’s horse farm until the fourth grade. Summers were about riding, fishing and make-believe, while winter brought sledding and ice-skating on frozen ponds. Most of life was magical, but not all.
I struggled with multiple learning disabilities, did not excel in school. I spent much of my time looking out windows and daydreaming. In the fourth grade (with the help of one very nice teacher) I fought dyslexia for my right to read, like a prince fights a dragon in order to free the princess locked in a tower, and I won.
Afterwards, I read like a fiend. I invented stories where I could be the princess… or a gifted heroine from another world who kicked bad guy butt to win the heart of a charismatic hero. Who wouldn’t want to be a part of that? Later, I moved to Florida where I continued to fantasize about superpowers and monsters, fabricating stories (my mother called it lying) and sharing them with my friends.
Then I thought I’d write one down…
Hooked, I’ve been writing ever since. I write historical, contemporary, urban fantasy, adventure, and young adult romances. I love strong heroines, sweeping tales of mystery and epic adventure… which must include a really hot guy. My writing is proof you can work hard to overcome any obstacle. Don’t give up. I say, if you write, write on!

In a village of masked men, magic compels each man to love only one woman and to follow the commands of his “goddess” without question. A woman may reject the only man who will love her if she pleases, but she will be alone forever. And a man must stay masked until his goddess returns his love—and if she can’t or won’t, he remains masked forever.
Seventeen-year-old Noll isn't in the mood to celebrate. Her childhood friends have paired off and her closest companion, Jurij, found his goddess in Noll’s own sister. Desperate to find a way to break this ancient spell, Noll instead discovers why no man has ever chosen her.
Thus begins a dangerous game between the choice of woman versus the magic of man. And the stakes are no less than freedom and happiness, life and death—and neither is willing to lose.

WHAT READER’S ARE SAYING:

“It’s one of those books that has such a big twist at the end that you want to go back and reread it from the start with new information about what’s going on.” – Jennifer Bardsley, Author


“Wow, this book took my breath away. The plot was very intriguing and it was unlike anything I had ever really read about before and it really pulls you in.” – Mollie, Reviewer

Amy McNulty is a freelance writer and editor from Wisconsin with an honors degree in English. She was first published in a national scholarly journal (The Concord Review) while in high school and currently spends her days alternatively writing on business and marketing topics and primarily crafting stories with dastardly villains and antiheroes set in fantastical medieval settings.

Complete the Rafflecopter for a chance to win!