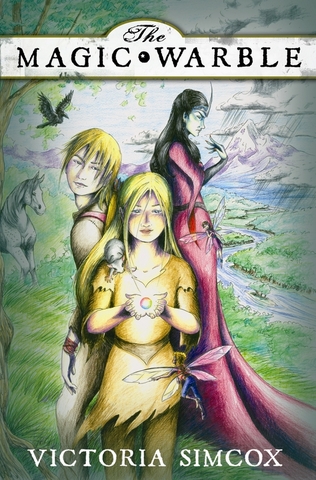 The Magic Warble
by Victoria Simcox

Goodreads blurb:  Twelve-year-old Kristina Kingsly feels like the most unpopular girl in her school. The kids all tease her, and she never seems to fit in. But when Kristina receives an unusual Christmas gift, she suddenly finds herself magically transported to the land of Bernovem, home of dwarfs, gnomes, fairies, talking animals and the evil Queen Sentiz. In Bernovem, Kristina not only fits in, she's honored as "the chosen one," the only one who can release the land from Queen Sentiz's control. But it's not as simple as it seems. To save Bernovem, she must place the gift she was given, the famous "Magic Warble," in its final resting place. She must travel through the deep forest, climb a treacherous mountain, and risk capture by the queen's "zelbocks" before she reaches her destination. Guided by her new fairy friends, Clover and Looper and by Prince Werrien, a teenage boy, and an assortment of other characters, Kristina sets off on a perilous journey that not only tests her strength but her heart.

About the Author:  Victoria, known as Vicki, was born in 1966, in Scarborough, Ontario, Canada, to an Austrian immigrant mother, and a Dutch immigrant father. She has one older sister, Jeannette. When Vicki was 7, she moved with her family to British Columbia. In her early twenties Vicki moved to Western Washington and now resides in Marysville WA. She has been married to her husband Russ, for nineteen years and they have three children; Toby, who is fifteen, Kristina, thirteen, and William, eight. She has home schooled her children for the past nine years, and she also teaches elementary school art. Vicki’s other family members are, a Chihuahua, named Pipsy, two cats, Frodo, and Fritz, and two parakeets, Charlie, and Paulie. She did have a pet rat named Raymond when she started writing The Magic Warble, but sad to say, he has since passed away of old age. Vicki enjoys writing, painting watercolors, watching movies, hanging out with her family, and chauffeuring her kids around to their many activities. Her favorite author is C.S. Lewis, and one of her fondest memories is when she was twelve. She would sit at the kitchen table and read The Chronicles of Narnia to her mother while she cooked dinner. These magical stories were very dear to Vicki and she remembers wishing, If only I could go to Narnia like Lucy and Susan. Vicki hopes that maybe, she can touch someone with her story in a similar way. 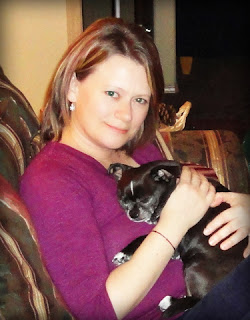 I won The Black Shard in a giveaway from Krystal’s Enchanting Reads blog giveaway, but Victoria gave me the option to start with book 1 since I hadn’t read it yet which I thought was very cool.

The cover is adorable, and I think it will attract kids like my son in middle school into checking it out.

The story is cute and engaging.  I think the author did a great job with the writing because kids can get into the story and understand what is going on.  I think the characters are life like because kids can be so mean to each other and cruel.  I think this story brings that to light which is cool because kids don’t think about how what they do and say can really affect others.  Kristina must push herself on her quest to save Bernovem & so she can get home. It is difficult to represent perseverance, but Victoria did fabulously through Kristina & Werrien.  Poor Kristina & Werrien have so many personal and actual battles while trying to get to and climb the mountain.  I love all the magical creatures and elements that were a part of this story, but it was very real life related as lessons go.

Another cool thing I noticed was a couple of the names were mixed up real words, but I’m not sure if that was on purpose or an accident.  For example, Bernovem is November with the last 3 letters moved to the front.  There is also a character’s name Lisheng which is English with the first 3 letters moved to the end.  It totally possible that there are more, and I missed it, but I just thought it was cool too.

I think this story could inspire kids, so you really should read it with your kids.

Don’t forget to enter the giveaway & get your own ebook copy!!

Enter the giveaway to win one of the 3 ebook copies of The Magic Warble to read with your favorite kids!!!

Other giveaways by me:
Signed copy of Saving Grace/swag