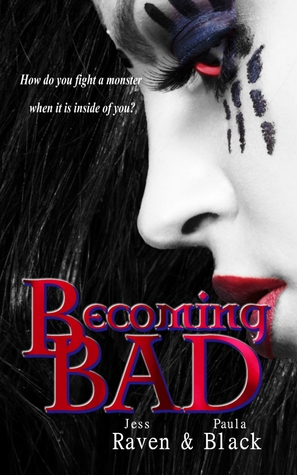 Goodreads blurb:  How do you fight the monster when it is inside of you?

The black lake beneath Dublin’s medieval city holds a secret. Imprisoned there for millennia, an ancient race of demi-gods have found a way to the surface and are preying on humans to feed their sexual appetites. Hunted to near-extinction, these half-men, half-beasts have been without a single female to breed a new generation. Until now.

All her life, Ashling DeMorgan feared her dreams. She kept her head buried in ancient mythology, because the real world seemed so much scarier. On returning to Dublin to settle her invalid grandmother’s affairs, Ash discovered a city plagued by the same wolf-like creatures that killed her mother. Their bite is like sexual heroin and Ash has been bitten. Now she is trapped in a waking nightmare, with the monster who ordered the death of the only man she’s ever loved. Made to doubt if she ever really knew the assassin-turned-guardian who stole her heart and gave his life for hers, Ash finds herself betrayed by her own changing body.

In a dangerous world of suspicion and divided loyalties, Ash must come to terms with what she is becoming. Worse still, her infuriatingly arrogant captor may just prove to be her most unlikely ally in what will become a life and death race for survival.

MacTire, king of a once formidable race, has lived his life in the shadow of a half-brother who took everything from him. Connal Savage seduced his mate and engineered a genocide that all but exterminated their species. Finally, he has a chance at retribution. Connal’s woman is his for the taking. But are the bonds of brotherhood so easily severed and are the ghosts of the past ever truly dead and buried, or will they come back to haunt him?

About the Authors:  The writing duo of Jess and Paula met online through their mutual love of paranormal and urban fantasy romance. They sparked creatively and have been writing together for the past three years. Paula lives in Dublin, Ireland with her family. She set aside a career in medicine to raise her three children. Jess lives in Manchester, England with her mother and dog, Simi. When she isn’t writing up worlds with Paula, she’s a wedding planner for a large retail store.

I loved this book!  You get to learn so much more about everything that you weren’t sure about from the first book, but of course there are all sorts of new things I have questions about.  This book sucked me right in and had all sorts of action, and it was definitely not what I thought would happen.  It is always a good thing when you are surprised by authors because you couldn’t predict what was going to happen.  There are so many miscommunications going on I do not think any character really knows what happened to the other characters in the past.  This story brings to light all of those things.  Ash is trying to adapt to all of her changes as she becomes something new.  I can’t really describe it without giving something away, so I will tell you if you enjoyed book1, then you will love this one more :)

I recommend this book to all the paranormal lovers out there.

Posted by Cassandra at 6:31 PM