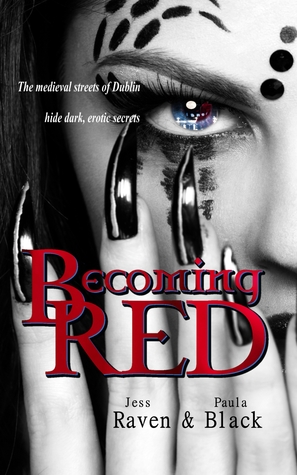 Goodreads blurb:  ‘You got me back. You always said you would.’

Ash DeMorgan, graduate, orphan, ice maiden, has long since consigned the fairytale nightmares of a troubled childhood to the realm of fantastical childish imagination.

Connal Savage, outcast, assassin, and living, breathing hunk of ancient mythology, has lived a thousand years servicing a debt of revenge. Dead inside. Until he encounters his boss’s granddaughter, an infuriating woman who threatens to lead him to hell with all his good intentions, who manages to chip away at the hard encrusted defences of a lifetime spent at war and burrow herself deep into a part of him that hasn’t breathed for centuries. He is about to discover that when it comes down to the wire, when you’re bargaining with the Grim Reaper for the life of the one you love, you will do anything...

Book one of The Becoming series. A new voice in paranormal fantasy and romance.

Okay when I first started this book, I was confused, and the book seemed pieced together.  I read parts that were worded awkwardly, and I thought the two authors did not write well together.  BUT (and it is a big one because it all changed!!) and I’m not sure when it changed, that awkwardness disappeared, and you couldn’t tell it was two authors writing it.  I'm not sure if part of the awkward could be contributed to this being the first book in a new series!  This story is awesome, and I would totally have given it 5 stars if it wasn’t for the beginning confusion.  The back story is tragic to both the female and male lead, but it helps draw you into their lives.  The drama, battles, and connections between the characters are exciting.  I was not happy where the ending left you hanging, but I will definitely be reading the next book which I’m sure was the point :)  It is definitely worth reading to all PNR fans!!  :)

**gifted to me by author for honest review

Posted by Cassandra at 1:24 PM