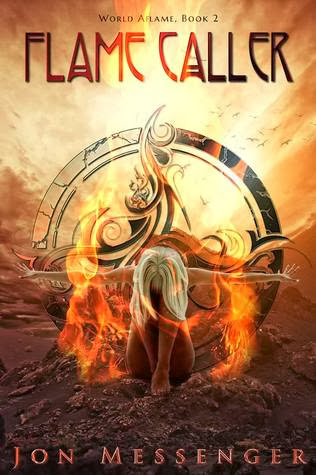 Goodreads blurb:  THE EARTH GIVES WAY TO THE SEA,
THE SEA BOWS BEFORE THE WIND,
THE WIND FEEDS THE FLAME,
THE FLAME BURNS THE WORLD OF MAN DOWN TO THE EARTH.

White Halls is no longer a sleepy little town. Its houses lie smoldering on their foundations. The residents take refuge in their homes, afraid to leave. And the town’s prodigal son and newest Wind Warrior, Xander Sirocco, has fled.


Xander survived the first assault on his life by the Flame Caste, but it’s at a great personal cost. He and Sammy are left to bury his family and tend to his grandfather, who lies in a coma.


With the weight of the world on his shoulders, he can’t help but feel the fight against the Fire Caste is hopeless. It seems that way, that is, until he learns of a secret race of Elementals, embodiments of the elemental powers that the different castes wield. With the power of the Elementals comes a chance to save not just the Wind Warriors and Sammy, but the world itself.


Emboldened, he sets off to find the Wind Elemental and with it, the hope for his survival. Too bad no one has seen the Wind Elemental in generations and now thinks she’s just a myth. As he quickly learns, however, the Fire Elemental isn’t a myth. It’s real and it has a secret plan for his girlfriend.

And it won’t stop until Xander is dead.

Grab your copy of Wind Warrior – The Novella for FREE on Amazon!

About the Author:  Jon Messenger (Born 1979 in London, England) serves as an United States Army Captain in the Medical Service Corps. Since graduating from the University of Southern California in 2002, writing Science Fiction has remained his passion, a passion that has continued through two deployments to Iraq, a humanitarian relief mission to Haiti, and an upcoming deployment to Afghanistan. Jon wrote the "Brink of Distinction" trilogy, of which "Burden of Sisyphus" is the first book, while serving a 16-month deployment in Baghdad, Iraq.  Wind Warrior is Jon Messenger's break through novel published through Clean Teen Publishing. Jon Messenger has won a readers choice award as well as the Clean Teen Publishing writing contest for his Novella of Wind Warrior, which is also featured in Wonderstruck.

***Received this ebook from Clean Teen Publishing for an honest review

Okay I mentioned this before, but the cover on this book is awesome.  It works and attracts you to the book.  I love everything about it!! Marya rocks at making covers for Clean Teen!!

Jon tells us a fabulous story.  He has a way with words that you feel that you are right there with the characters.

Xander is a great hero though I did want to slap Xander a few times when he was having a pity party to snap him out of it and was mad at him a time or two, but I’m not telling you why because it would spoil the adventure for you.

Xander’s friends Sammy, Sean, and Jessica are still integral parts of his life, but everyone is having a rough go in this book.  The Fire Caste is causing havoc and turmoil for everyone.  Xander feels the pressure from everyone to save humanity.

I have no idea where the story is going which is frustrating but awesome at the same time.  The ending was awesome and infuriating all at the same time which again I won’t tell you why because it would spoil your adventure.  The book was over much too quickly, and now I’m in another holding pattern because I want book 3!!  Jon, please hurry, I gots to know what happens next!!

If you read Wind Warrior, you have to read this one too!  And to all my friends out there who love books about elemental powers who haven’t read Jon’s books yet, what are you waiting for!!

I highly recommend this series to anyone who loves a good adventure story!!

Still not sure, grab your copy of Wind Warrior – The Novella for FREE on Amazon to try the series!


Enter the giveaway for a chance to win: